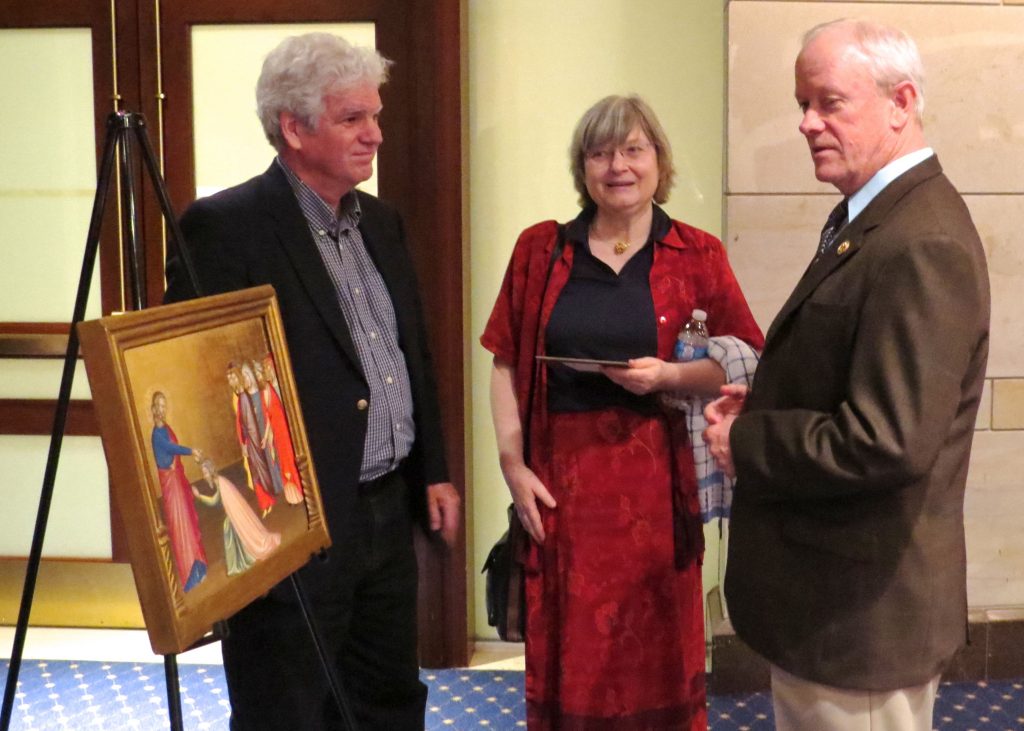 William Brown (L), chief conservator of the North Carolina Museum of Art, and Ingrid Daubechies, professor of mathematics at Duke, show their recreation of a portion of an altarpiece by Giotto to Rep. Jerry McNerney (D-CA) – the only Member of Congress with a PhD in mathematics.When the average person thinks of “big data,” the first things that come to mind may be government agencies gathering intelligence, political campaigns tracking voters, or even big retailers trying to learn shopping habits.  But a new initiative at Duke is helping to change the way people see big data – and all of the things you can do with it.

The Information Initiative at Duke (iiD) is a place where multidisciplinary teams come together to make sense of “big data” – sources of information characterized by massive size, tremendous variety and rapid change – and make that data matter. Duke faculty and students are working to harness and find patterns within massive data sets to address challenges ranging from the precise detection of explosives, to early diagnosis of autism, to the identification of counterfeit art.

Faculty members from the iiD traveled to Washington, DC on June 9 to share what impact the mathematical sciences can have on this last field, the fine arts.

Guillermo Sapiro, professor of electrical and computer engineering, and Ingrid Daubechies, professor of mathematics, highlighted their work in the intersection of mathematics, data, and the arts in “Big Data to Big Insights: Mathematics Revealing Art,” a panel discussion hosted by Duke in Washington at the Capitol Visitors Center. William Brown, the chief conservator at the North Carolina Museum of Art with whom Daubechies has collaborated on several projects, rounded out the presenters.

“By collaborating with artists, art historians, and museum conservators, scientists at iiD are learning to ask questions of big data that provide a new way of illuminating the research frontier in the mathematical sciences,” said Robert Calderbank, director of the iiD and moderator of the panel.

“In turn, the answers to these questions reveal new processes and techniques and can increase our understanding of the fine arts in unexpected ways,” Calderbank said.

The briefing attracted a diverse cross section of the Washington community, including Rep. Jerry McNerney (D-CA) – the only Member of Congress who holds a PhD in mathematics – and staff members from the Library of Congress, art institutions, and North Carolina Congressional offices.  A reporter from Time also attended and posted a nice writeup here. 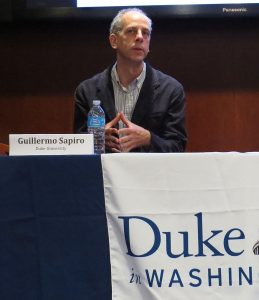 Sapiro, a leader in image and signal analysis (Sapiro’s image processing algorithms are used in a little thing called Adobe Photoshop), discussed his work utilizing emerging technologies like 3D printing to create an interactive exhibit that traces the history of works of medieval art in the Brummer Collection at Duke’s Nasher Museum of Art.  Students in one of Sapiro’s classes, co-taught by art and art history professor Caroline Bruzelius, are highly involved in creating these interactive exhibits for the Nasher as part of the course requirements.

Daubechies and Brown shared several projects on which they have collaborated, including a study of the Peruzzi altarpiece by Giotto and replication and rejuvenation of another 14th century altarpiece, in preparation for an exhibition in Fall 2016 that will reunite panels now spread over four different museums in the US.

As she described at the panel, Daubechies can use mathematical tools to analyze crack patterns and other aging processes on older paintings, imagine digitally how they might have looked when new, and how a new painting will look when it ages. She is even able to combine data from different imaging methods to determine new information about a painting, like the style of drawings that lie beneath a finished work.

Daubechies (whose work is responsible for the JPEG 2000) and Brown are also developing software that will be able to digitally remove protective cradling that is commonly used to protect works of art  but that obscures details in “x-ray” images of the panels.

During Monday’s briefing, Calderbank said the projects represent “the center of gravity of the initiative’s work,” projects where “the data sets are complex or have holes.”

In some cases, these “holes” aren’t even known to exist until two experts from different disciplines work together to discover them.  Daubechies believes that it is this interdisciplinary nature of the work that will will move each field forward in ways that might not happen in the absence of such collaboration.

Recalling some initial reactions to her desire to combine her math skills with the expertise of conservators, Daubechies said, “Someone at the beginning of this said, ‘what can you teach us that we don’t already know? We have two eyes.’ ”

“‘Yes, but we want to give you a third eye.’ And that makes it possible to work together. It’s not competitive, it’s enriching.” 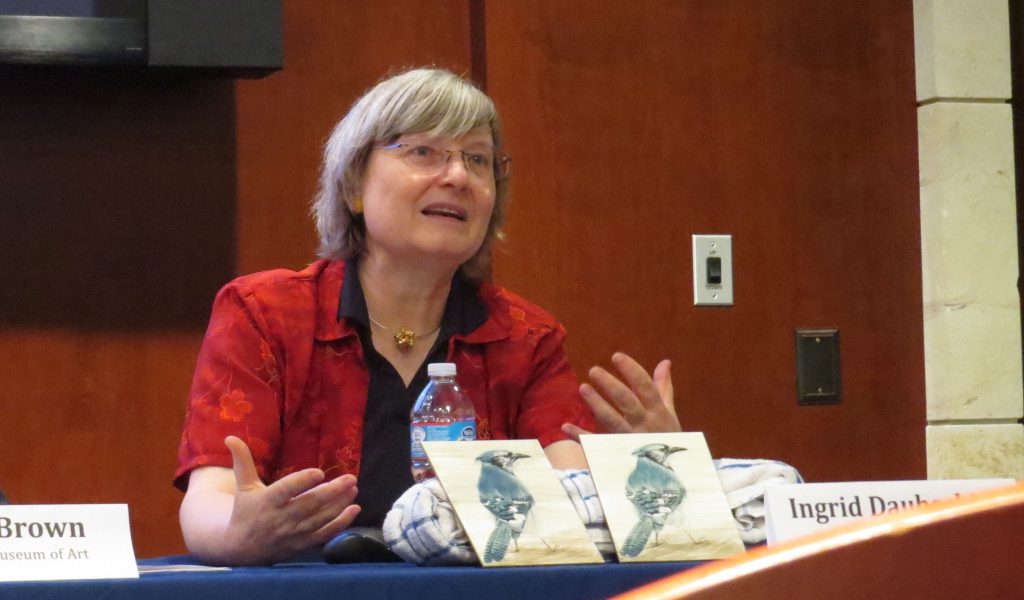 Ingrid Daubechies, Jame B. Duke Professor of Mathematics, explains her work in using math to replicate and rejuvenate works of art.

See a few more photos on our FB page here!